Who is Taher Shah?

Unless you’ve been living under a rock for the past week or so, you’ve probably seen ‘Angel’ - Taher Shah’s second music video which has taken the world by storm. By the time you finish reading this sentence, probably 10,000 more beings have been exposed to his magic.
In case you haven’t seen it, here’s the video, and in case you have, there’s no such thing as too much of Taher –

So why’s this crap breaking the internet?
Firstly, I object to YOU calling it crap, to be honest, the weird ass video and the tear-inducing lyrics apart, I actually found the tune pretty okay.

My good friend Vijay Purohit told me about Taher Shah a couple of years ago, and I remember watching ‘Eye to Eye’ only halfway, closing the video before the bit about ‘spectrum eyes’.

But the song didn’t stop on closing the app, it played on in my head, repeatedly.
I gave in to temptation and saw the full video.

Disgusting. Who told this guy he could sing? Who gave him the idea to make a video?

In a while though, I knew something was off when I found myself humming “Without you, I am like a butterfly, without fly.”

I gave myself a mental slap and tried to forget all about Taher.
It was useless; the singer in me might have shut up, but now Taher’s smiling face cropped up everywhere. 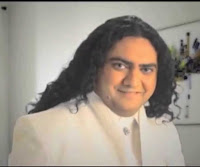 Damn. This shit was addictive.
I watched ‘Eye to Eye’ over and over again, until disgust turned to hilarity and finally admiration. Then I watched his interviews.
The thing is, this guy seemed totally oblivious to criticism and didn’t seem to understand that people invited him to their shows with the sole intention of making fun of him.
“What do you plan to do next Taher?” a pretty Pakistani anchor asks him, eyes fluttering.

“My next project is a movie. It is a very love story movie.” He replies, dead serious.
I am still waiting for the said ‘very love story’ movie, it ranks number 3 on my list of ‘Movies I hope are released before I die’ (FYI, ‘Deshdrohi 2 – Return of the Deshdrohi’ and ‘MSG – 3’ are ranked 1 and 2 respectively).

A child like quality about Taher shone through all his interviews, he genuinely seemed to believe that he was the next big thing and that people loved his song for its musical merit.

Maybe the success got to him, maybe he thought he couldn’t fail. But he is at it again, with ‘Angel’.

The video and the lyrics have gotten more atrocious, so have the costumes, but the viewership has expanded as well.

In a span of one week, ‘Angel’ has garnered close to 2 million views.

The versions of the videos with the most views on YouTube appear to have been uploaded by someone else, but I have a sneaky feeling that Taher’s the man who earns from the ads, else he would have obviously had them taken down.

So, here’s what I think.

Behind the cherubic face, sparkling eyes and the 100 watt smile, lies a sharp brain.
You could forgive him for ‘Eye to Eye’, he was an amateur with a modest budget.
But a lot has changed since then, he’s made what I presume to be tons of money, (it shows on the video of Angel, he’s rented a golf course for christ’s sake!) and surely a well-wisher would have subtly warned Taher by now (‘Naa Taher bhai naa, wearing a purple dress and a tiara, and showing off your chest hair is not a good idea’).

Yet, he chose to go ahead, and if viewership and fame are the criteria, it’s obviously a mega success, it’s trended worldwide, even The Washington Post has talked about it.

Taher Shah knows what works and what doesn’t, and he’s made a living out of it.

He keeps the trend going by issuing statements from time to time, such as revealing that his hitherto unknown wife and child have been featured in the video, and issuing a post that says ‘become angel like humans and value humanities worth and diffuse love throughout the world. Like all of you humans are like angels I am also like an angel’ (sic).

Laugh at him, he wants you to.

For every chuckle and guffaw, keep in mind that he is also laughing; all the way to the bank that is.
Posted by Kanishka at 21:54:00