There are many general entertainment channels available for watching, some even under the guise of news channels, and on these channels there are great many programmes, but let us restrict ourselves to Indian channels, whether or not Mr. Rupert Murdoch owns a stake.

For the last decade or so, there have been quite a few TV shows that have captured the imagination of the nation, at least briefly.

But it's the 21st century, and much like my girlfriend from school days - the nation's love is fickle (I kid, I never had a girlfriend in school, but you, dear reader, would have probably guessed that already).

Kaun Banega Crorepati no longer has viewers glued, come to think of it, it's off the air.

Satyameva Jayate had viewers and Aamir Khan reaching for the hankies, and reminded us of Doordarshan programmes of yore, but it went off the air faster than you could spell 'i-n-t-o-l-e-r-a-n-c-e'.

In the TRP battleground, many have reached the top, but few have remained there, five names come to mind immediately.

Here they are, in no particular order:

Why would anyone be interested in the upside down spectacles of Mr. Tarak Mehta?
Watch it to find out.
2000+ episodes and this desi sitcom shows no sign of slowing down.

IPL
Yes, it's a TV show.
Yes, even though we love test cricket and want it to survive, it is the Super Kings, Kings XI and Knightriders we actually want to see play. And please, the world needs more teams which have the word 'king' or a variation thereof in its name, and while at it, more cheerleaders too. 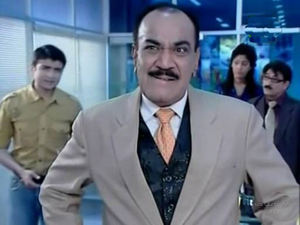 CID may not have the episode count of TMKOC (before you get any ideas, that stands for Tarak Mehta Ka Ooltah Chasma, duh) but it's on the verge of completing 19 years.

The Newshour Debate with Arnab Goswami

Okay, here you go, a post on him by greatbong:- Goodbye Arnab Goswami (For Now).

.....and last but not the least, my personal favourite

Every time I watch Bigg Boss, my IQ dips a little, and sometimes when I am not busy eating chalk, I wonder if I have any IQ left at all.

But I watch it nevertheless.

#1 Do you from time to time start humming "zeher hai ki pyaar hai tera chumma" for no rhyme or reason?
#2 Have you ever tried googling the name of the lead actress from 'MSG - Messenger of God'?
#3 Do you like to fart in elevators when you are alone, and before you get off, hope that the smell lingers long enough for the next occupant to detect it?
#4 Do you like comparing your hotdog against the other guy's when you are at the urinal?
#5 If you were offered a super power, would you choose invisibility, only so that you could do stuff...or people?
#6 Have you ever visited Desibaba?
#7 Ever used your roommate's toothbrush to clean the loo?

You get the drift.

Okay, so maybe you haven't actually done any of the above things (especially #5, but if you are denying #6, you are a fucking liar).

The point I am trying to make here is, we all go a little mad sometimes, and that's okay, you're not alone.

But what would it be like to live in a madhouse with nuts around 24 x 7, a sort of Arkham asylum if you will, where the only rules are there to promote further mayhem?

What would it be like to take off your mask of sanity and really dance like no one is watching?
Except they are watching, millions of them.

Welcome to the world of Bigg Boss.

Sure, the show may be scripted, situations contrived, and the participants - a bunch of wannabes, pseudo-celebs and has-beens - but honestly, do you give a shit?

Do you really want to know how Minnisha Lamba looks without makeup? Or what Rakhi Sawant's mother likes to cook for her little angel?

Bigg Boss appeals to our animal, voyeuristic instincts, a part of us that enjoys the chaos when our best friends fight each other; the reason we slow down when we see an accident on the road, but don't actually stop and do anything about it, the same perverted part of us that make us forward those gory beheading videos, or instances of animal cruelty on WhatsApp in the name of spreading awareness.

Bigg Boss doesn't exist because its creators thought that it would be a neat idea to lock people up and treat them like lab rats for  three months.
It exists and more importantly, succeeds because it holds a mirror to the society. It tells us that it's okay to be loud, crass, annoying and selfish....in fact, it might even make you popular (well, hello Mr. Trump, err, I mean, Mr. President). Something that you always knew deep down.

Scripted or not, Bigg Boss is a microcosm of the world, minus the subtlety, and it would be funny if it wasn't so sad.

The beauty of this incredibly dense show is that it isn't pretentious, it doesn't patronize us in a way that Satyameva Jayate or the last season of KBC did.

Of course, there are many who (rightly) detest bigg boss and choose to avoid the programme, but I like to believe that they are getting their sadistic kicks elsewhere. Maybe from Comedy Nights with Kapil (oops, missed featuring it on the list) or its Sony avatar, or Splitsvilla, or Roadies, or Crime Patrol, etc.

If, however, god forbid, you are not into any of that garbage...it's highly likely that you are making up for it with your real life activities.

And now, if you'll excuse me, it's time for me to find out if Gaurav Chopra really has the hots for VJ Bani.