I kept my umbrella and the bag of vegetables at the counter of the tea stall, next to the jar of biscuits, and wiped the sweat off my forehead.

It was a cloudy Sunday morning and it looked like it could rain at any moment, but I was not exactly in a hurry.

I ordered a cutting chai and sipped on it leisurely. The rains would be more than welcome, it was hot.
The resident stray dog of the shop stood nearby, his hopeful eyes caught my sight and he started wagging his tail, I had fed him a couple of times earlier and he was probably expecting a treat from me.
I asked for a packet of Parle-G and gave him a couple of biscuits.

From the dilapidated building complex across the street, harsh words from what appeared to be a young man’s voice spilled over.

“We are done, you hear? We are through, it’s finished”, said the voice.

Ah, matters of the heart. 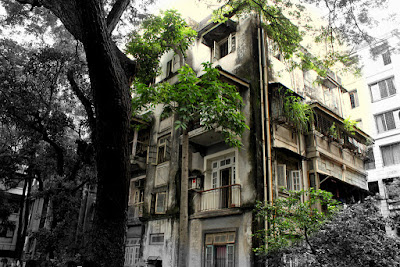 That no replies could be heard along with the fact that the owner of the voice fell silent from time to time, I figured that the young man (or boy) was having this conversation over the phone. Of course, the ten feet high wall around the garden meant that I wasn’t able to see him.

“How dare you? I’ve told you thousands of times, and every freaking time you’ve said that you won’t do it again. Not anymore.”

I brushed my hand over my scalp, facing little resistance from the hair I had once been so proud of.

“What do you mean it’s my fault? Tell me how many times I have done that?”

The words may have been different, but the tone and the pain sounded awfully familiar; how many times and with how many people have I had similar conversations? But then, who hadn’t?

The last remnants of his pride were about to be shred apart. The extended pause told me that the person at the other end of the line had, in spite of the threats, or probably because of them, had hung up.

But our unseen protagonist was not going to take it lightly, was he?

My tea was finished, and I should have left for home, I instead fumbled around for a while around my pocket, brought out two worn-out notes and asked for another cup.

Surely, I could spend a bit of my Sunday the way I fancied.

The rage had evaporated from the boy’s voice now.
“Why are you doing this to me? You know I can’t live without you.”

I chuckled sadly, still no originality.

He was about to cry.

I had a sudden urge to see the boy, to tell him that he was going to be alright, that she would move on, and so would he, that in a year’s time, he would probably forget all of this ever happened.

Instead, I took a long sip of my tea and listened on.

And then I saw him.

No, not the boy, an old man, inside the building complex, he was leaning against the window grill of his third-floor apartment, and he was following the conversation with as much interest as I was.
He was looking at the boy from above and his gaze followed the path of the boy much like a predator preparing for his kill. His face betrayed the pleasure he received from seeing and hearing others who were not aware that they were being watched and heard.

Meanwhile, our protagonist had started sobbing.

“I am sorry. Just that I read everything, and I couldn’t think properly.”

The old man licked his lips, he was enjoying this, probably more than I was. Maybe when I am his age –

“FUCK OFF. JUST FUCK OFF.”
Oh, he is gonna regret that.

The clouds rumbled and almost immediately it started raining, a slow drizzle to start off with, but I knew that it would start pouring soon.
I was safe under the shed and checking that my bag of vegetables was still in place, I asked for a cigarette.

“Let’s just forget all of this ever happened. Let’s go back to how things were.”

Yeah, sure kid. Good luck with that.

The old man’s unhappy stare told me that the boy was going inside his building.

He craned his neck as the subject of our interest went out of his sight and out of my earshot.
The man sighed and looked at the sky, and then muffling a cough; his eyes darted around for anything else worthy of his interest, and then our eyes met.

The abruptness of the moment got the better of me and I let out a smile, meant to convey that we had been witnesses to the scene that had been playing out.

Caught unawares, he shuddered and for a brief moment didn’t know what to do, and then in an instant he vanished inside his room.

I chided myself for smiling, I had probably embarrassed him, at his age he probably had little to look forward to; that window was in all likelihood, literally and figuratively, his window to the world.

I turned and saw the shopkeeper looking at me.

“Sir, will you be taking anything else?  I am about to close the shop. The rain doesn’t look good”.

I paid for my cigarette, grabbed hold of my umbrella and rushed out in a hurry, forgetting all about my bag of vegetables.