# 43 - Of Dhinchak Puja, Varun Pruthi, and other things garbage

Pooja, in India, is a fairly common name; it's the equivalent of a Rahul or an Abhishek. Shout out "Pooja" in a crowded place and you're sure to see a couple of heads turning back to look at you. Trust me, it works, even if there's no girl in the vicinity. Works even better if you are naked, but, I digress.

Before I go on, it is only fair that I mention where this rant is coming from.

Remember 'Free basics' and 'internet.org'? It was Mark Zuckerberg's grand plan to provide free access of the internet to everyone. It didn't take off. We, the people, quickly understood that the basic tenets of free internet would mess up net neutrality...and we protested and protested until the government took notice.

Thank God we didn't get free internet; net neutrality or not.

"Why, you capitalist SOB, would you say that?"

I am glad you asked.

Do you know what we used the internet for when it's given free? Zuckerberg might tell you that the Internet can be used for sharing crucial information, knowledge, news, basic services blah blah blah.

It is true, the internet CAN be used for all of those things. What we end up using it for, however, is an entirely different matter. 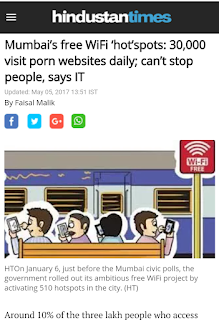 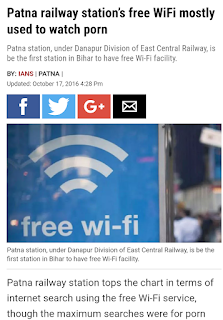 Forget free, even when we pay for it, we tend to use it mostly for (ahem) unproductive purposes.

A friend and I keep discussing if the internet is a boon or bane, and we always end up talking about the regularity with which it provides us pop-culture icons and nuggets of gold and I am not even talking about Justin-Baby-Bieber here. It was one of such conversations that led to this post.

Back to Pooja, Dhinchak Pooja.

Until a few weeks back, almost no one had heard of Dhinchak Pooja, barring her die-hard fans of course.

But now, everyone is talking about Dhinchak Pooja and her swag wali topi, her selfie game level, how she drives a stationery Audi and what not.

If there's one thing that we can unanimously agree upon, it is the fact that aside from her remarkable  ability for consuming alcohol (refer her video ‘Daaru Daaru Daaru’), kicking ass (refer to lyrics of aforementioned ‘Daaru Daaru Daaru’), and the extraordinary skill to take selfies anywhere anytime - the girl has little or no talent. Especially so far as singing is concerned.

There are plenty of people who lack particular talents, but I don't suspect they are willing to go public with a show of how unremarkable, nay, how pathetic they are in that particular field.

You see, that's where we have gone wrong. It appears that some of us got fed up with talented people excelling in their respective fields, and decided to strike back.

Dhinchak Pooja, Kanti Shah, KRK, Hero Alom etc. have mastered the art of being so bad, that they stand out.

And in our quest for social media supremacy (also known as ‘me first syndrome’), we, the mango people, eager to make fun of these creatures end up making them stars.

Which brings me to Varun Pruthi, this guy:

Varun is a different case. Unlike apni Pooja, Varun doesn't sing. Varun doesn't dance. He does get teary eyed though a la Satyameva Jayate.

You see,  Varun is in the business of preaching, badly. His videos are so obviously staged that WWE stars would feel confident about their character's storyline.

What separates Varun Pruthi from the other social media superstars is the fact that he isn’t trying to get your attention by being bad at something (even though he is, he doesn’t use it as his USP), he is trying to pull at the strings of your heart.

At last count, 31 of my facebook friends had liked his FB page. I am judging these people unless of course, they are in it to make fun of the guy, because at the end of the day Varun Pruthi is a smarter version of Dhinchak Puja.

Varun is a wannabe actor (his handle VarunActor gives it away) except he couldn't make it in the movies or television. His motivation for uploading videos may have been genuine to start off with, but with time he has gotten cheesier and cheesier, and I suspect that it is all a cover for bijness.

He is apparently a motivational speaker as well.

Oh, and he is selling stuff too.

Bad actors, fake tears, repetitive inspirational music, tacky lines pretending to be motivational, it's all there. And in spite of that, 58 lakh people have fallen for his act.

Dear reader, the fact is there's only one thing that sells more than mediocrity, it is garbage, the awfulness of the free kind (that's why RGV films aren't popular, sure they are crap, but you gotta buy tickets).

And there's nothing wrong with garbage, I have written eloquently on why I love Taher Shah before.
These are times of showmanship; if you got it - flaunt it, if you don't, flaunt it even more.

The problem is free garbage isn't just restricted to singing, dancing, and do-gooders. There are others who pride themselves on their ability to disseminate BS, of course to them it's knowledge.

So we have people proudly stating that UNESCO has declared India's national anthem as the best in the world, NASA taking a well-lit photo from outer space of India showing how funky India looks on Diwali night and a guy on Facebook trying to convince others that India is actually an acronym for "independent nation declared in August".

Then there's the 2000 rupee note with the GPS embedded chip, the post with the image of a malnourished child, saying "if you scroll down without typing 'amen' then you WILL die tonight.

You get the drift.

Forget free, there are times when I think we don't deserve the internet at all.

Every time I see a teenager posing next to Ronald McDonald and throwing gang signs while taking a selfie I feel the strong urge to take his cellphone away and throwing it in the general direction of the Arabian Sea.

And then I check my browser history and forgive him immediately.

Perhaps end up taking a selfie myself - with Ronald and the said teenager.

Maybe it's time for me to make my debut as a singer/video star.

How does Krazzy K sound?